EKE, RITUALS AND RE-USE AT AN IRON AGE COASTAL SITE 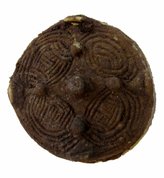 Situated in a large expanse of grazing land on the south-eastern coast of Gotland, exists an ancient fortification known as Gudings slott, in connection to a number of mysterious stone monuments, building foundations and graves. This assemblage of ancient monuments and the information obtained through excavation, suggests that the site constitutes an Iron Age ritual landscape.

The excavation of Gudings slott and the related ancient remains in the area is part of an ongoing research project, The Connecting Point, which seeks to investigate human activities along the Gotlandic coast during the Viking Age. Archaeology on Gotland has led to numerous discoveries regarding the Viking Age activities of settlements, farmsteads and harbor sites, but much of the coastal area has yet to be investigated. The aim of the research program is to discover more coastal sites, figure out what activities took place there and to connect them in both time and function.

The south-eastern coast of the island has had relatively few excavations and therefore, what we know about the Viking Age in this region is limited. Gudings slott is registered as an ancient fortification - a type of monument found throughout Scandinavia, typically interpreted as a defensive structure from the Early Iron Age. The purpose of these ancient structures is widely debated and evidence of their function or dating is rare. The current research suggests that not all fortifications belong to a homogenous category, as many appear to have served a function other than defence and may have instead been ritual locations. In some cases, these structures were re-used as burial grounds hundreds of years after they were built, as is the case at Gudings slott.

Before the investigations of the field school, there had only been one previous excavation at Gudings slott in 1988. The team of archaeologists excavated a stone-setting (a type of ancient grave monument common on the island) in the south-western part of the enclosure where they found several Viking Age inhumation burials complete with grave goods. In addition to the burials, they also found a hearth outside of the grave that was dated to the 2nd century AD (Roman Iron Age). Aside from the excavated stone-setting, there were 14 additional stone-settings registered at the site, though there appeared to be many more along and atop the walls of the stone enclosure.

In the historic map (see right), the fortification is quite clear, as is a long stone wall leading south-east. Also clearly visible in the map are a number of cairns. Today, the northern and western parts of the wall are still obvious, but the rest of the wall is severely destroyed and the extension can hardly be seen through the dense woodland that now envelopes it. The land has been used for forestry and as grazing land, rather than for agriculture, so the ancient remains have not been highly disturbed. The poor arability of the land also tells us that there has never been a settlement in the area, and therefore, the ancient remains found in this landscape must be connected to other activities. 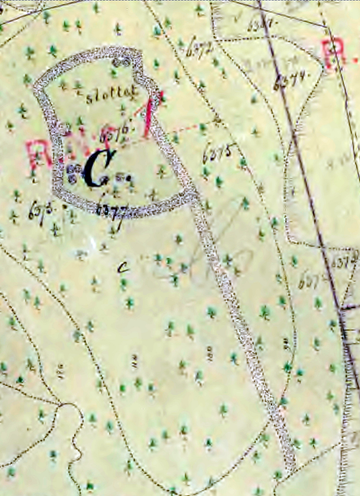 The map above is from the 19th century and shows Gudings slott as it appeared at that time.

Overview of the structure of the wall.

Overview of the walls of one of the building foundation.

The excavation of the stone-walled enclosure included several sections of the wall, three possible constructions within the structure, areas just outside and inside of the proposed entrance and a number of depressions located in the middle of the site. While there was an absence of artifacts connected to the wall, the inner structure, known as a shell-wall (see top left), was clear and consistent in each trench. Unfortunately, the possible stone constructions inside the wall provided even less information, although one can be said to be a building foundation as it has a clearly visible  rectangular shell-wall (see bottom left).

The most notable evidence found in relation to the activities surrounding the enclosure was a hearth located just inside the entrance. Analysis of the charcoal dates the hearth to the 5th century AD (Migration Period), which, while a few hundred years younger than the hearth discovered in the 1988 excavation, is well within the time frame that these structures are thought to have been constructed. A hearth was also found inside the aforementioned building foundation and we are currently awaiting the radiocarbon analysis results.

Another important date comes from charcoal discovered inside a post hole, which dates to the Late Bronze Age. The post hole was discovered in one of the excavated depressions and could be connected to the coastal activities (such as fishing) that took place at the site long before the construction of the structure.

Unfortunately, the limited evidence does not provide any concrete information as to the purpose or function of the structure, though this tends to be the situation for many excavations related to this type of monument on Gotland.

Based on the findings from the 1988 excavation, the field school excavated eleven more stone-settings located inside and outside of the structure's wall. The purpose was to confirm the existence of additional graves, rather than just those that were previously registered, and to investigate their context in relation to one another.

Of the eleven graves excavated, there were a total of twelve inhumation burials (including females, males and one adolescent), ten of which were accompanied by grave goods including knives, brooches, beads, and spindle whorls. The grave goods date to the Viking Age, as does the north-south orientation of most of the individuals. The style of grave goods, particularly the box and animal head brooches, is highly typical of Gotland, suggesting that the individuals buried were not foreigners.

Three of the graves were disturbed, with only small bone fragments (such as foot bones), beads and fragments of grave goods remaining. Based on the absence of the skeletons, and the location of the material remains (being relatively still in situ), and the tidy appearance of the stone-settings, the individuals seem to have been carefully removed from their graves, rather than the graves having been plundered. One of the stone-settings was completely devoid of artifacts and is likely a cenotaph, or symbolic grave.

Given that the majority of the burials appear to date to the Viking Age, it is remarkable that two of the graves contained individuals buried without any grave goods and oriented east-west - practices that are typical of Christian burials. Radiocarbon analysis was performed on one of the individuals and the results concluded with certainty that the individual lived during the 13th century, well into the period of Christianization. With this information, a bone fragment from one of the disturbed graves was sent out for analysis, and this too resulted in a Medieval date, though a bit earlier than the first.

Overall, the findings from the 2018 and 2019 excavations indicate that the Viking Age cemetery is larger than previously thought and could represent a transitional period between pagan and Christian burial practices. Samples from the remaining individuals have been sent out for analysis in an effort to establish a time frame of the burials at Gudings slott.

One of the Viking Age inhumation burials. Note the box brooch located near the skull. 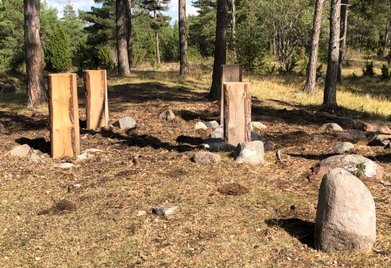 Reconstruction of the postholes after excavation. 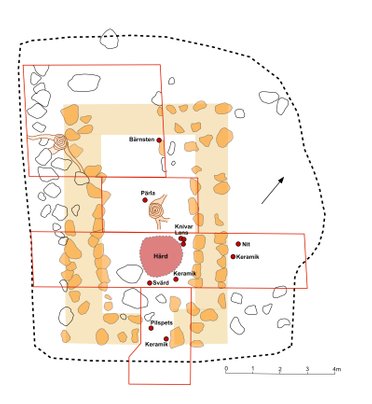 Plan over one of the building foundations, where knives, a bent spear, a sword, an arrowhead, fragments of ceramic vessels and a hearth were found.

A large part of the 2019 excavation included ancient remains in an area c.a. 600 meters south of Gudings slott. The remains here comprised a solitary stone-setting, a row of erected stones typically found in Iron Age cemeteries, long lines of stones, strange postholes, and grave monuments that did not appear to be graves. The landscape here is much the same as Gudings slott, and the elevation of the land suggests that the monuments resided on a small promontory during the Late Iron Age.

The solitary stone-setting contained the burial of a male individual, oriented north-south, but did not contain grave goods. To affirm the dating of the burial, samples have been sent out for radiocarbon analysis. No other visible graves could be located nearby.

The strange postholes (referred to as such because of their enormous size and minimal distance from one another) had been registered as a grave monument, though it was clear that they were not a grave, nor were they four individual graves. There are four postholes, each approximately one meter deep and 2.2 meters apart from one another forming a perfect square. Based on the inner diameter and the form of the postholes, the posts would have been 40 centimeters wide and square also. For such large and tight posts, the construction they supported would have either been very tall, very heavy, or very important. Little was found inside the holes that could suggest what the structure had been, but a tidy collection of animal bones (including those from a hare, a frog, a small bird, and a large bird) were found inside one posthole. Also, in the bottom of two of the postholes were the remains of the wooden posts, which appear to have been burnt down. Samples of the wood were sent out for analysis and the results are that they are from pine, dating to the 9th century AD.

The excavation also included two building foundations (one that had been registered as a grave and one previously unregistered). The foundations consisted of low shell-walls, like the building foundation at Gudings slott, with one being highly destroyed. In both foundations, fragments of ceramic vessels were found, along with burnt bones and hearths. In one of the buildings, a deposit of weapons was excavated (see bottom left). The weapons included several knives, an arrowhead, a bent spearhead, and a sword, which, based on its measurements, likely dates to the Early Viking Age. The weapon deposit and the lack of everyday materials (such as household ceramics and food scraps) suggest that these buildings should have had a ritual function, in line with the other monuments in the area.

For more information, don't hesitate to contact us at info@arendus.se